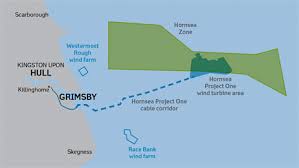 Hornsea Project One is located 120km off the Yorkshire coast and covers approximately 407 square kilometres. Hornsea Project One has a total capacity of up to 1.2 GW, which will be able to meet the electricity needs of around 1 million UK homes, once completed. The project is estimated to cost at least £4.2 billion. Ørsted entered a joint venture for Hornsea Project One with SMart Wind in December 2011, with an option to acquire the remaining 66.66% when the development project received consent from the Secretary of State for Energy and Climate Change. Consent was granted in December 2014 and Ørsted, having exercised its option on 4th February 2015, has now become the sole owner of the project. Onshore construction started in early 2016 and construction of the wind farm started in early 2018 with the placement of the first foundation for one of the turbines. The total area of the wind farm will be 407km2. The cable linking the wind farm to the UK will come ashore at Horseshoe Point and will connect to the National Grid at Killingholme. Hornsea Project 1 will become the World’s biggest offshore wind farms when completed in 2020 and will become the first wind farm in the World to have the capacity of over 1GW.