"A four-hour drive from the Humber ports gives you access to 40 million people and 75% of UK manufacturing sites. A total of 320 million customers in mainland Europe can be reached within 24 hours." 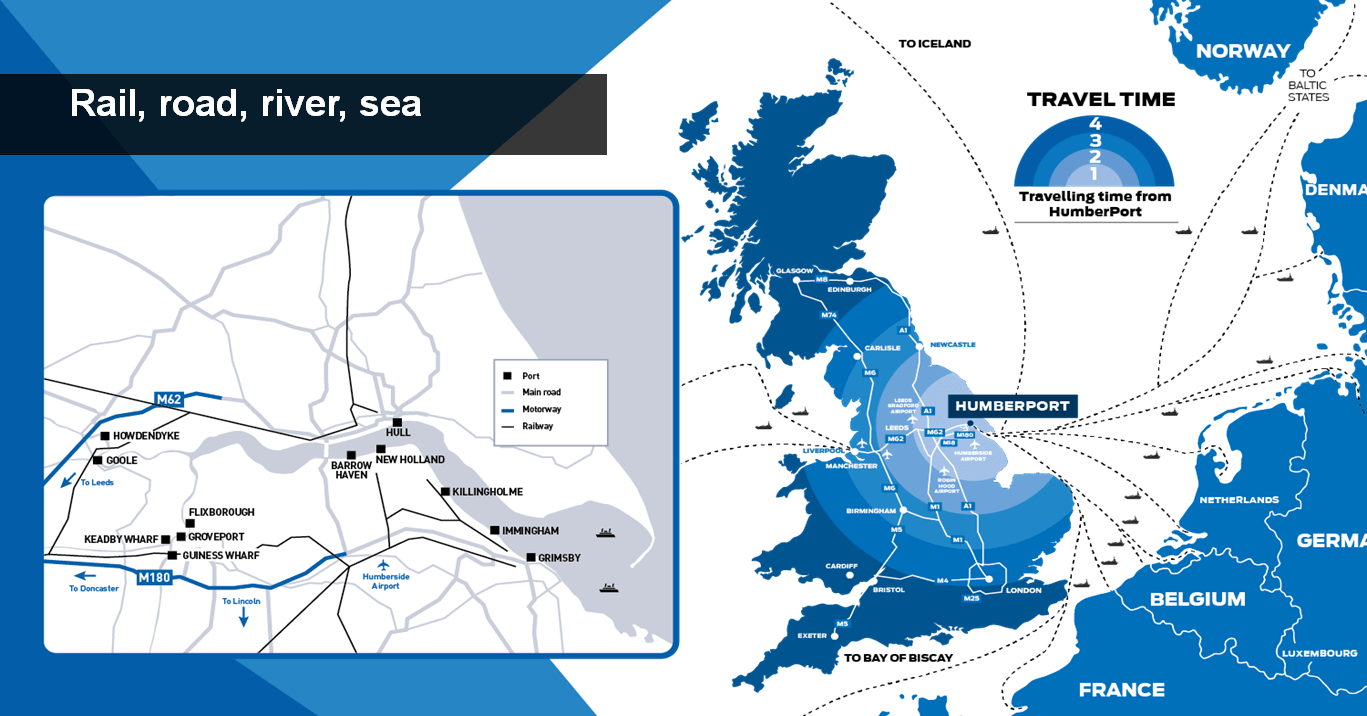 The Humber region consists of the four Local Authorities that surrounds the Humber tidal estuary. These are: Hull City Council, East Riding of Yorkshire, North Lincolnshire and North East Lincolnshire.

It consists of a number of major and minor sea ports and has a rich maritime history. Humber's logistics platform consists of its logistics assets and infrastructure, together with land, air and sea connectivity, the logistics services, policies and regulations that enable the distribution, transport and storage of goods to support national and international trade. Currently, the strategic location of the Humber makes it ideal for the vast movement of goods in and out of Europe. The ever-expanding development of infrastructure drives national and international stakeholders to look at Humber as the centre of their transhipment and destined goods. It hosts UK's largest multi-purpose ports complex and the fourth busiest in Europe. The Humber ports have a number of links and services into main land Europe, Northern Europe and the Baltics, whether it is a daily ferry service into Rotterdam or cargo services to Antwerp, St Petersburg (weekly) or Sodertalje (twice a week). They are linked to the UK road network by the M62/M180 corridors and offer unrivalled access (in terms of travel time, distance and ultimately cost and CO2 emissions) to cargo and containers destined for the North of England. 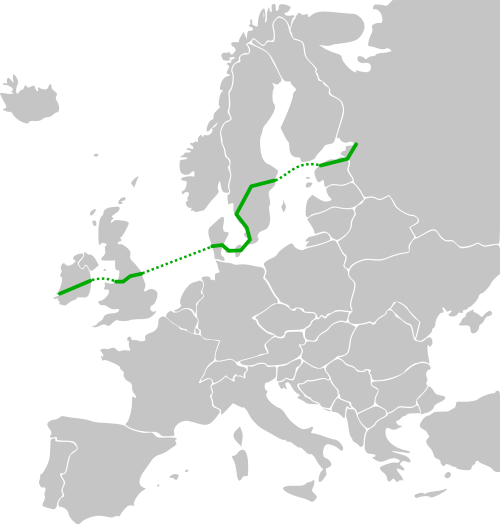 The E20 corridor comes from the international E-road network which is a numbering system for roads in Europe and was developed by the United Nations Economic Commission for Europe. The E20 corridor is 1,170 miles long and goes through 6 countries starting in Ireland and finishing in Russia. The route crosses both land and sea.

The route’s most western point is the airport at Shannon in Ireland and travels across northern Europe and ends at Saint Petersburg in western Russia. One of the aims of the Corridor is to increase connectivity along this multimodal route to facilitate trade among the regions traversed by the route. Along the route there are two water crossings, UK to Denmark and Sweden to Estonia. Another aim is to generate economic growth along the route through Northern Europe due to the potential economy value being in excess of £120bn according to the World Trade Centre. For the Humber this will lead to a higher traffic through the ports, and increased exposure to the European market. The position of the Humber in the E20 route means that the Humber ports are a vital part of the E20 route operating successfully and should give the ports a constant flow of business.

The corridor travels through the following locations:

The E20 route starts in the West of Ireland at Shannon Airport and goes East through Limerick and Nass towards Dublin which is on the East coast of Ireland. The route in Ireland is 142 miles from the airport to Dublin. To route continues over the Irish Sea and into the UK mainland. To cross the Irish Sea a ferry from Dublin to Liverpool is needed. P&O operate a direct ferry from the port of Dublin to the port of Liverpool which is a 135 mile journey across the Irish Sea. Irish Ferries and Stena Line also offer crossing but these are to Holyhead in Wales and it’s a 94 mile drive from there to Liverpool.

Once in mainland UK the E20 corridor goes from West to East from Liverpool to Hull. The E20 route uses the M62 motorway to travel from Liverpool to Hull and on the route the M62 passes large cities such as Manchester and Leeds. The route is approximately 130 miles and at both ends there are excellent port facilities. At the Humber end there is no direct ferry between Hull and Esbjerg but there is another ferry crossing with DFDS Seaways from Immingham which is on the South bank of the Humber and is only a 30 mile journey from Hull.

The E20 route enters Denmark at the port of Esbjerg where the ferry from Immingham. In Denmark the route is motorway all the way from Esbjerg in the far West of the country to the Oresund Bridge in East. The Oresund Bridge is the location of the border between Denmark and Sweden. Inside Denmark the total length of the E20 from the West to the East is 196 miles and this includes 8 miles on the Great Belt Bridge.

In Sweden the total length of the E20 is 480 miles and goes from the South-West of the country to nearly half way up the East coast of Sweden. The route in Sweden passes through the centre of the capital, Stockholm and ends to the West of the city. The road network around Stockholm is known as Essingeleden and this includes most heavily trafficked road in Scandinavia. To aid in decreasing the congestion around Stockholm a new tunnel was constructed north of the inner city and the tunnel forms part of E20 route. To the West of Stockholm there is a ferry which crosses the Baltic Sea and goes to Tallinn in Estonia. The crossing of the Baltic Sea is 240 miles and takes over 14 hours.

In Estonia the E20 takes the route of the national main road NR1from. The route in Estonia takes the form of both motorway and single carriageways. The distance between Tallinn and the Russian border is 136 miles.m